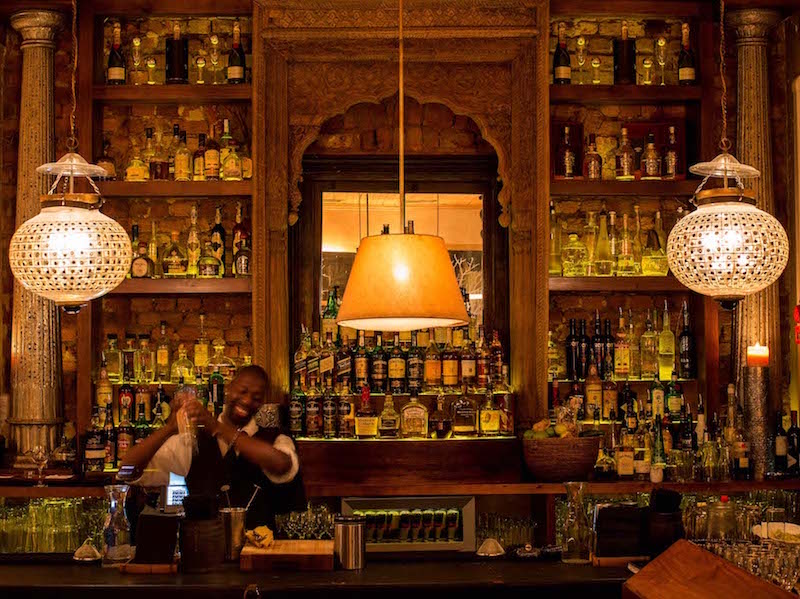 Cape Town isn’t called the Mother City for nothing. This is where South African – and African – trends are born, and the cocktail scene is no exception. Here’s what’s shaking down south: where to go, who to know and what to expect.

Cape Town isn’t called the Mother City for nothing. This is where South African – and African – trends are born, and the cocktail scene is no exception. Here’s what’s shaking down south: where to go, who to know and what to expect. Introducing Cape Town’s coolest cocktail bars.

If Cape Town is the Mother City, this is her cradle, where many an aspiring cocktail bartender has been baptized by fire. Some of the country’s greats that have passed through – collecting trophies along the way – include Dominic Walsh, Brent Perremore, Assaf Yechiel, AJ Snetler and Nick Koumbarakis. A constant has been co-owner Raymond Endean, who’s been coaxing the best out of his staff since 2012.

The House of Machines

Coffee shop by day, cocktail bar and live-music venue by night, this is your round-the-clock hangout. Here you’ll get considered cocktails; instead of showboating, much of the magic happens behind scenes and the drinks are left to speak for themselves. Most noteworthy is the bar’s barrel-aged program, where spirits are matured in rotating eight-gallon French oak, Japanese cedar and American oak casks. As such each pour will be slightly different, but always sensational.

COCKTAIL STYLE: Old school classical with a touch of experimental.

This isn’t a bar, it’s an experience. Owned by the same creative minds behind The House of Machines (and just next door), this intimate establishment was set up with the help of Luke Whearty and Aki Nishikura from Singapore’s Operation Dagger… which explains its shades of Asia, from its minimal interior to its tataki-style bar snacks. There are definite African influences too, evident in the many local botanicals you’ll find in the drinks. You won’t spot any glaring brands though, just an assortment of homemade tinctures and potions dotted discretely behind the counter.

Once Cape Town’s best-kept secret, this hole-in-the-wall speakeasy-style bar is accessed via an actual chocolate shop. It’s also on the site of an old mortuary, and it has the sluices to prove it. Head Bartender Peter Lebese helped design the menu, which features an assortment of homemade juices, syrups and tinctures. In an effort to minimize waste, excess produce is transformed into a whirlwind of dusts, sugars, shrubs and infusions too, making for fascinating cocktails.

Part member’s club, part public parlor, hotelier Nigel Pace and designer Sarah Ord have taken historic Leinster Hall and dressed it up in flamboyant feathers and faux fur. There’s nothing silly about the drinks though, which are as serious as anywhere else in the city, the menu being designed by respected industry stalwart Derrick Erwee. Come for an afternoon tipple on the verandah before dining in the bistro, and finally settling in at the bar to enjoy the show.

Entering Asoka is like stepping into an enchanted forest, and not only because it stars an olive tree festooned with fairy lights. The décor has developed naturally since 2002, when owner Paul Hetreed first opened shop, and it shows in its dramatic detailing. This is a place to come to switch off from the day, share high-end tapas and imbibe premium cocktails.

Although the new kid on the block, having opened early in 2017, this is the latest venture of an experienced hospitality consortium. It’s a classic cocktail lounge, yet with the feel of a neighborhood bar – and it’s certainly supported as such. Each week a local or international trend is selected, and the team is challenged to cook up something special, with the winning creation being showcased.

COCKTAIL STYLE: Balance of classic and cutting edge, but always seasonal and sustainable.

This post first appeared on Tales of the Cocktail on 12 December 2017.